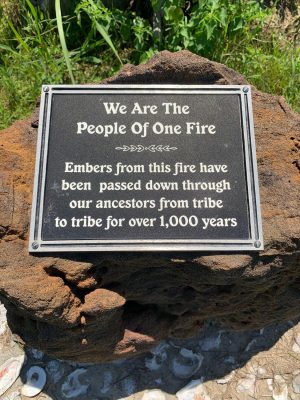 With the blessing of the Creek Confederacy, our people had followed the rivers south from Georgia Territory into Spanish Florida to escape the removal policies of the United States Government. The Santa Rosa Band of the Lower Muscogee are direct lineal descendants of Muscogee Creek Indian people who lived on the lands of what is now Northwest Florida long before Florida became a U. S. Territory.

The Indian Removal Act of 1830 authorized President Andrew Jackson to negotiate removal treaties with Indian tribes living east of the Mississippi River. This Act passed in Congress by only four votes.

The U. S. Supreme Court, on March 3, 1832, held by 5-1 in Worcester v. Georgia that states did not have the right to impose regulations on Native American land.  Writing for the court, Chief Justice John Marshall wrote that “the Indian nations had always been considered as distinct, independent political communities, retaining their original natural rights as the undisputed possessors of the soil.” Even though Native Americans were now under the protection of the United States, he wrote that “protection does not imply the destruction of the protected.”

Florida became a State on March 03, 1845.  The Florida Indian Removal Act of 1853, passed by the General Assembly, removed any possibility of Creek people openly living their traditional lifestyles and worse, identifying themselves as a tribe. This was the first Act of oppression and discrimination by the State of Florida through the attempt to extinguish any form of self-governance, traditional ceremonies, use of native language, practices, and lifestyles as Indian people by threat of removal.

The Act states, “It shall be unlawful for any Indian or Indians to remain within the limits of this State and any Indian or Indians that may remain or may be found within the limits of this State shall be captured and sent west of the Mississippi; provided, that Indians and half-breeds residing among the whites shall not be included in this section.”  Compliance with the term “residing among the whites” meant the total abandonment of Indian identity.

Consequently, the Creek people were left without any rights or provisions by this Act.  They had to go underground keeping the language, heritage and culture hidden from the Government so they would not be removed for breaking the law.  This law remained a part of the statutes of the State of Florida for 111 years until the federal Civil Rights Act superseded it in 1964.

One of the major survival tactics used by Creek people was the move to incorporate organized religion into the community.  In doing so, the Creek Indian people were able to comply with the provision of the Indian Removal Act by “residing among whites.”  At the same time, the church provided an avenue for them to hide their community in plain sight, keeping their culture intact, as much as possible.

Being a member of a militia was another way Creek Indian people were able to comply with the provision of the Indian Removal Act by “residing among whites.”  The Muster Roll of Captain Reuben N. Barrow’s Company was certified on 24 July 1838. Men of the Company were mustered at Yellow River. Historical documents indicate this to be a Company of Creek Indians.

Reuben N Barrow is a documented Creek Indian.   Many of the names on the Muster Roll also appear on the Yellow River Baptist Church Roll of which Santa Rosa Band of the Lower Muscogee members are direct lineal descendants.

Involvement in local politics was important to survival.  Indian tribe leaders collectively agreed upon certain candidates that could best serve the needs of their people.  The leaders and would pass their decisions down to the tribal members which resulted in a voting bloc for a candidate.

In one such Indian community voting bloc was used to elect John Carter Allen territorial Sheriff of Santa Rosa County, before there was a State of Florida.  John Carter Allen’s Creek Indian parents had been killed in the Ft. Mims massacre.

The past cannot be changed.  The only thing left for us to preserve is our language, heritage and culture.  We have a whole set of knowledge systems that have been passed down to us from beyond millennia.  We still uphold their sacred covenants.  They let us know our place in the world and give us guidelines for living in harmony and walking in balance with the body, spirit and soul.  Po monken heyvt os! … We are still here!

Built and hosted by Site-Crafters.com